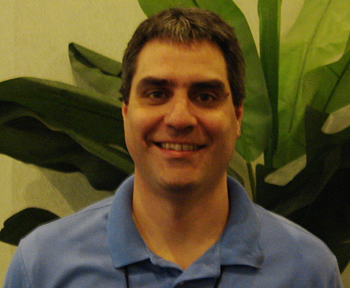 Sulfur Hexafluoride (SF6), used as an insulator in high-voltage utility equipment, has been targeted for emissions reduction by the EPA.  Together, the EPA and many major utility companies are working to better control SF6emissions because it contributes more to the greenhouse effect than any other gas and has a projected atmospheric life of 3,200 years.

This presentation will explore how a recent technological advancement in infrared thermography allows us to detect SF6 in real time.  Some of the benefits of using this technology will be highlighted, including decreasing SF6 emissions, helping to preserve the environment, and detecting more than twenty other fugitive gases.

“Through Power Partners, the power sector, and the Department of Energy (DOE) are working together to develop and implement voluntary climate actions to sustain economic growth.  Of particular interest to the electric power sector is SF6.  Sulfur hexafluoride is used as an insulator for circuit breakers, switchgear, and other electrical equipment.  The electric power industry uses roughly 80% of all SF6 produced worldwide.  SF6has a very high GWP – 23,900 times the warming effect of carbon dioxide per ton emitted.  Therefore, even small amounts of SF6 emissions can constitute a significant carbon-equivalent emission tonnage,” according to a report by Power Partners – a joint government-industry initiative to reduce greenhouse gas emissions.

“Under ideal operating conditions, SF6 would remain contained within transmission and distribution equipment.  In reality, however, SF6 is inadvertently emitted into the atmosphere during various stages of the equipment’s life cycle.  Leaks generally increase as equipment ages.  Fugitive emissions can escape through valve fittings and at joints between flanges and porcelain bushings.  SF6 can be accidentally released at the time of equipment installation as well as during servicing.”

Each year, the program’s participants have exceeded their goals for reducing SF6 emissions.  According to the EPA’s 2005 Annual Report, “SF6 Partners in 2005 have collectively achieved a 32-percent decrease in emissions from the 1999 baseline year.  Approximately 190,644 pounds of SF6, or the equivalent of 2.07 MMTCO2 emissions have been avoided.  Cumulatively (1999-2005), emissions avoided total 635,182 pounds or 6.88 MMTCO2.”

The EPA and 81 partner utility companies are now working together voluntarily in a program called SF6 Emission Reduction Partnership for Electric Power Systems.  More information about this initiative can be found atwww.epa.gov/electricpower-SF6.

In addition to basic information about the partnership, the website contains proceedings from past conferences, details about upcoming conferences and workshops, case studies, a directory of service providers, a list of the 81 partners, and other documents that can help utilities develop strategies for reducing SF6 emissions.  In addition to maintaining the website, the EPA sponsors research, conducts technical conferences, and helps partners implement voluntary programs.

There are several examples of successful SF6 reduction programs in industry.  Each are noteworthy and show the need for further similar programs.

One major utility reduced SF6 emissions by 50% according to an EPA website case study called “Reducing SF6Emissions Means Better Business for Utilities”.  The emissions savings program has been yielding net savings of $300,000 annually.  In addition, the firm estimates it can save an additional $50,000 to $100,000 annually as a result of improved SF6 handling.  Overall, utility industry partners are achieving the goal to cut emissions below acceptable levels.

The active scanning combination of IR camera and illuminator was designed to emit an infrared beam, which, when scattered off an object, would return to the camera.  If an absorbing gas was located between the scattering object and the camera, then part of the beam would be attenuated.  It was this slight difference in the amount of return beam that allowed an IR image to be displayed showing the presence of the gas.  These types of active camera systems can only detect a SF6 cloud when the beam has a background object to bounce back from.

This requirement for background beam returns is a liability with active scanning systems.  They are completely dependant on the amount of the beam that is returned.  Since different objects scatter the beam in varying amounts and in varying directions, the return beam is never consistent.  When surveying outdoor substations for instance, the camera operator is typically on the ground.  When he points the camera upwards towards tall gear with only the sky as a background, the active system fails, as there is nothing to bounce the beam back.

“For years, electric utility transmission thermographers have wanted a camera that could spot leaking sulfur hexafluoride, SF6…. Now there is an IR camera that can spot SF6 in very small amounts and is a completely passive system, requiring no infrared laser but for the smallest leaks,” according to a report delivered by Robert Madding and Robert Benson at the October 15, 2007 InfraMation Conference in Las Vegas.

“U.S.  electric utilities used over 1.5 million pounds of SF6 as refill for leaks.  At the current price of about $10/lb., this amounts to a $15M annual cost to our electric utilities just to replace leaking SF6, not to mention the reliability costs associated with potential downtime, outages, and expensive repairs.”

Inspecting SF6-pressurized equipment at tens of thousands of substations in the U.S. is a daunting task.  IR optical imaging offers a smart solution – it’s a better way.

The GasFindIR camera can be used to find leaks over significant distances.  One can often find small leaks at a 30 foot range with standard 50mm EFL optics.  The GasFindIR infrared camera is able to survey tremendously large areas quickly.  It detects as fast as the operator can see.

A well-planned gas emissions detection program can help to reduce health and safety hazards, save money, and improve production by eliminating or recovering lost product.

Benefits of an SF6 Reduction Program

The camera can also be equipped with a longer focal range lens for distance surveillance such as conducting pipeline surveys from a helicopter.  A number of US gas transmission companies, including El Paso Natural Gas and Western Gas Resources, already have acquired the camera.  The Texas Commission on Environmental Quality (TEQC), the Louisiana Department of Environmental Quality (LDEQ), ExxonMobil, Dow Chemical, Texas Petrochemical, and other companies and agencies use gas finding cameras to help reduce the risk of explosions, fines, and greenhouse gas emissions.

GasFindIR MW has been certified for the detection of a wide range of gases, including benzene, ethanol, ethylbenzene, ethylene, heptane, hexane, isoprene, MEK, methane, methanol, MIBK, octane, pentane, 1-Pentane, propylene, toluene, and xylene, as well as butane, ethane, and propane.

Some of the first discoveries with the early cameras included gas plumes escaping from valves, gasoline vapors escaping a non-vapor recovery hose at a gas station, as well as methane, propane, naphthalene, and butane.

“The natural gas system in the U.S. is vast, being comprised of hundreds of thousands of wells, hundreds of gas processing facilities, over one million miles of pipeline, and millions of consumers,” according to the Power Partners Resource Guide, which was published by an initiative of government and industry representatives established to help reduce greenhouse gases.

The EPA describes the “Natural Gas STAR Program” at its website:
http://www.epa.gov/gasstar/index.htm

Optical gas finding technologies evolve and draw from the current state of the art in IR imaging.  Infrared imaging technology holds great promise for the development of new  vapor detecting applications.  Significant resources are invested in continued research and development, development of guidelines, and training for the next generation of IR imagers.  The benefit of this commitment to industry and the public will be improved safety, cost-savings, and protection of the environment.