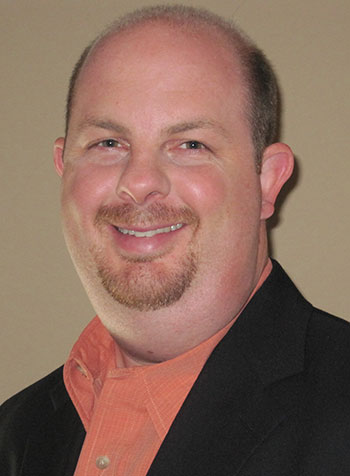 CMRP
Manager of US Operations

High energy prices and global competition dictate a need to reduce energy waste and improve system efficiencies whenever possible. Steam, aside from being one of the most costly utilities in plants, is an essential component to product quality in many processing industries. A major contributor to waste and inefficiency is leaks: both to atmosphere and through valves and steam traps.

According to the United States Department of Energy, a typical facility can realize steam savings of 20% by improving their steam system. Improvements to the steam system may include insulating steam and condensate return lines, stopping any steam leaks, and maintaining steam traps. Experts have also said that as much as 20% of the steam generated at the central boiler is lost to leaking or failed steam traps. With current steam prices averaging between $8.00 to $12.00 per thousand pounds of steam, a steam trap inspection program is a must. For example, if a steam trap with an orifice size of 3/32” operating at 100 psi steam can lose nearly 30 lbs. of steam per hour, at a cost of $8.00/1000 lbs. of steam, that results in a loss of over $2,000 per year from just one failed steam trap.

The purpose of a successful steam trap inspection program should be to repair any faulty steam traps and steam leaks that can impact safety, to reduce energy waste and promote sustainability, and to repair any failed steam traps and steam leaks that impact product quality. A successful steam trap inspection program will also have proper documentation and reporting procedures in place that will show the benefits of the program from inspection initiatives that will include the dollars saved from the reduction in energy waste, any dollar amounts related to the decrease in scrap or product quality, and any dollars saved from downtime avoidance that could have resulted from the failed steam traps. This paper will discuss the principles and practices of an effective ultrasound steam

Ultrasound technology is used by maintenance and reliability professionals around the world, and is considered to be the most versatile of any PdM technology. Typical applications for ultrasound include compressed air & gas leak detection, bearing inspection, motors, gearboxes, electrical inspection of energized electrical equipment, valves, hydraulic applications, and steam traps. Hand-held airborne and structure- borne ultrasound instruments sense and receive high frequency sound waves that are produced from various sources that include friction as in an under lubricated bearing, ionization in electrical discharges like corona, and turbulence such as a compressed air leak or failed steam trap.

While walking the area where the steam traps are located, it would also be a good idea to note any accessibility issues that may need to be addressed prior to doing the inspection. Will a ladder or man-lift be needed for any steam traps that are overhead and out of reach? Are any steam traps located in areas where Lock-Out-Tag-Out procedures will need to be followed? Are any of the steam traps inside hazardous

areas of the facility where instruments that are rated as Intrinsically Safe will be required? Also, what PPE will be required such as gloves, safety glasses, hard hat, a long sleeve shirt, etc.

Also during the walk through, other conditions should be noted such as: an abnormally warm boiler room, a condensate receiver is venting excessive steam, a condensate pump water seal is failing, the conditioned space is either overheating or under heating, the boiler operating pressure is difficult to maintain, and a presence of water hammer.

Once an accurate database of all of the steam traps has been created, the steam trap inspection can begin. To make it easier to manage the data for reporting and inspection purposes, it is recommended to break the inspection areas into zones. Follow a logical progression from steam production, steam use, and condensate return. Start at the boiler, then to the steam distribution and distribution branches. Then, proceed to process equipment, and finally to the condensate recovery systems.

When it comes to actually testing the steam traps with ultrasound, the most important item that the inspector will need to know once they are at the steam trap, is what type of trap is being inspected. Once contact has been made with the steam trap and the ultrasound instrument, the type of steam trap will determine what the trap is supposed to sound like. Steam traps will have one of the following sound characteristics: On/Off or Continuous Flow.

Typical types of steam traps that have the On/Off (hold/discharge/hold) sound are: Inverted Bucket, Thermodynamic, Thermostatic (Bellows), and Bi-Metallic. Steam traps with a continuous flow sound characteristic are: Float & Thermostatic and Fixed Orifice. It is recommended that you listen to a number of traps prior to starting the inspection to determine a “normal” sound characteristic for how the steam trap is operating under the operating conditions of your particular steam system. 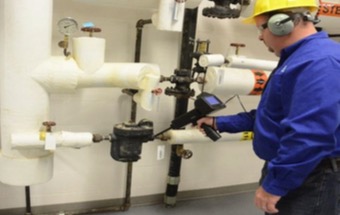 Once contact has been made, adjust the sensitivity/volume on the instrument until the sound of the trap can be heard. Figure 1 shows the location on the steam trap where contact should be made with the stethoscope module on the ultrasound instrument.

When inspecting steam traps with ultrasound, it is important to exercise patience. Make contact at the discharge orifice of the trap, and wait for the steam trap to cycle. If the temperatures have been checked, and the trap has not cycled for approximately one minute, move on to the next steam trap. If the steam trap has not cycled within one minute’s time, it may be difficult to know when the trap may cycle again, but if the temperatures are OK and there’s no indication of a plugged condition, proceed to the next steam trap to be tested. When first starting out, it may be helpful to compare sound characteristics from similar types of steam traps to help the inspector learn what a good or failing steam trap sounds like.

Now that the inspector has gathered all of the information for the condition of the steam traps that were inspected, it is important to document the findings. Not only should the operating condition of the steam trap such as failed, leaking, or OK be reported, but also the dollars lost from the failed or leaking steam traps. In order to generate the Steam Loss Report in the Ultratrend DMS software from UE Systems, the inspector will need to know the following information for each steam trap: Type of Trap, Orifice Size (if unknown use a common orifice size of 1/8” or estimate based off of the pipe size), Inlet Temperature, Outlet Temperature, Operating Condition (OK, Leaking, Blowing, Plugged, Not In Service), and how much it is costing to generate 1000 lbs. of steam ($/1000 lbs.). If you are using UE Systems’ Ultraprobe 10000 or Ultraprobe 15000 instruments, you can enter this information onboard the instrument as the steam trap survey is taking place. Figure 2 shows the report once it has been generated in the software after the data have been compiled.

Airborne & Structure-borne ultrasound instruments are valuable inspection tools that not only provide insight into the health of steam traps, but also other components of the steam system such as heat exchangers, shutoff valves, control valves, solenoids, relief valves, cavitation in condensate return pumps, and steam leaks to atmosphere.

Once the data have been compiled, proper reporting and documentation of the failed or leaking traps and the dollars associated with the failed steam traps must be reported. With an increased focus on energy and sustainability within our industry, this is a great way to show potential customers and suppliers that energy loss is taken seriously and that there is a continuous effort being made to correct problems related to energy loss. An ultrasonic steam trap testing program is an easy, quick, and accurate way to identify problems with the steam traps and the overall health of the steam system.