This paper describes and illustrates how infrared (IR) cameras are being used to diagnose the condition of buildings by detecting thermal anomalies. For example, IR thermal imaging can identify moisture within building materials that can support the growth of fungus and mold and compromise structural integrity. IR inspection is a well accepted practice for identifying anomalous heat patterns in roofing systems, walls, floors, and ventilation systems caused by the presence of water leaks and from condensate in HVAC systems, as well as from air leaks.

IR cameras can “detect and image” the heat produced by biological activity in invasive fungus, mold, and insect colonies, greatly facilitating the planning and implementation of remedial action. IR is also used to monitor the drying process after catastrophes involving moisture, such as plumbing leaks, floods, and fire control and to confirm that a fire is fully extinguished. In addition, IR thermography is a widely accepted practice for inspecting electrical systems, determining the thermal efficiency of building insulation, checking door and window seals, and auditing the performance and condition of heating and cooling systems.

This paper describes some of the many ways infrared (IR) cameras are being used to diagnose the condition of buildings by detecting thermal anomalies. This list is not meant to be all-encompassing. In many respects, the uses for infrared are limited only by the imagination of the user. This diversity of applications is important, especially for small to medium-sized contractors, in that it allows them achieve their return on investment on their cameras more quickly, usually in a year or less for cameras priced in the $10,000 range.

Infrared imaging can identify thermal patterns associated with latent moisture, and thus potential mold, in building materials by their difference in temperature from nearby dry areas. Typically, wet areas on interior building surfaces are cooler by several degrees Fahrenheit than materially similar, but dry areas.

Thermal imaging minimizes the need to perform destructive testing, provides instant visual documentation of findings and provides evidentiary-quality, intuitively understandable data with a much higher degree of accuracy and reliability than moisture meters and other moisture detection technologies, allowing restoration and construction companies to complete their work much faster and less expensively than in the past. 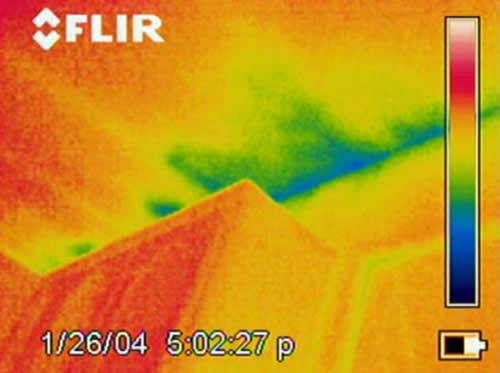 This infrared color thermal image shows a thermal pattern
typical of moisture infiltration, a potential source of mold growth, in the corner of ceiling.

An IR camera can quickly and non-destructively detect areas of missing, moisture-laden or otherwise damaged insulation in walls, crawlspaces and attics or around doors, windows, electrical outlets and other access plates. All can increase a building’s energy costs by allowing cold air to enter the building and heated air to escape in the winter, and the reverse in the warmer, summer months. IR can also identify poorly insulated or uninsulated pipes, another source of costly heat losses. 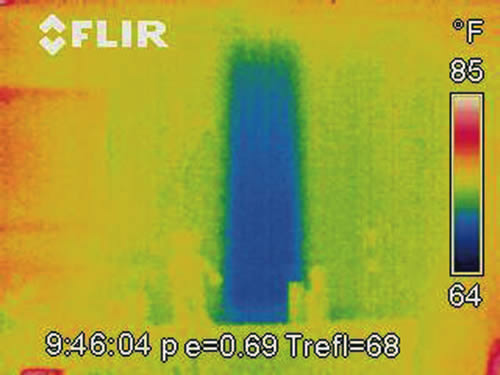 This IR thermogram clearly identifies the source of a cold spot in a residential living room: a stud bay missed during blow-in insulation process.

The structure is then pressurized or depressurized and the highest sustained positive operating pressure is sustained and documented for each floor. The building is then scanned again with the IR camera following the same inspection pattern as in the first inspection and the surface temperatures for each inspection are compared to determine any significant differences.

The increased use of EIFS (Exterior Insulation and Finish Systems), stone, stucco and brick veneers and siding as facades on residential as well as commercial buildings invites the possibility of water intrusion if they are not properly installed. IR can detect evidence of moisture infiltration in these weatherproofing ‘barrier’ systems, usually the result of insufficient detailing such as inadequate or improperly applied flashing or sealants. In addition, IR can monitor and track moisture migration paths within the wall cavity. 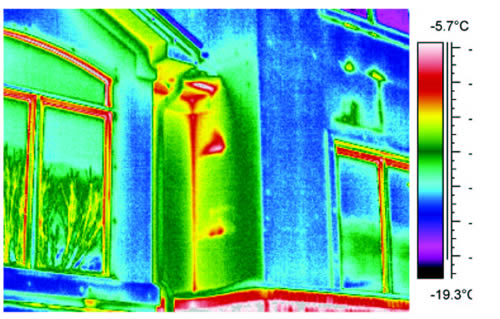 The red hot spot on this infrared thermogram was caused by latent moisture
that entered due to a missing sheet metal ‘kicker’ flashing behind the EIFS facade of a single family home. 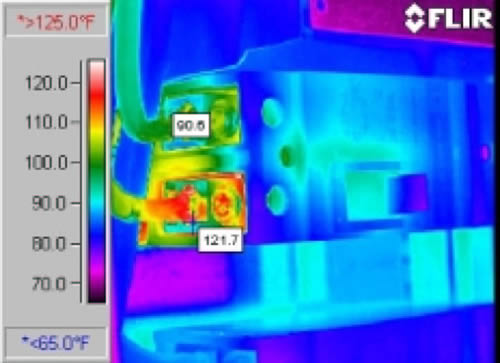 In this thermogram of a 240V 110A breaker, the load rating (95)
of the B phase exceeds 80% ampacity and its temperature exceeds the breaker’s rating.

IR can also detect thin spots in the linings of furnaces, heat exchangers and flues, mechanical problems such as worn, under-lubricated pumps and motors, bearings in fans and compressors and electrical faults, refrigerant leaks and blockages in HVAC components, another source of costly energy waste.

Leaks through a flat roof membrane can cause costly damage to a building’s contents and discomfort to its inhabitants. An infrared inspection can identify areas of wet, missing or moisture-soaked insulation caused by roof leaks, permitting the repair of just those areas rather than the much more costly replacement of the entire roof.

An IR roof inspection is best conducted after sunset, since the wet areas retain the heat absorbed during the day longer than the surrounding dry areas, causing a temperature difference that can be imaged, with the wet areas showing up as hot spots. 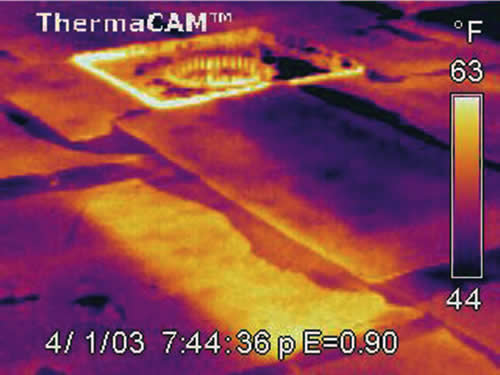 The warmer red, yellow and white areas of this IR thermogram of a roof
taken after sunset indicate moisture-soaked insulation caused by leaks around the walkway and roof drain.

IR can also be used to inspect roof decks from inside a building, a highly effective approach when working with metal and ballasted roofing systems, which are difficult or impossible to inspect from above. In this case, inspection is performed shortly after sunrise, when the wet areas of the underside of the roof warm up more slowly than dry areas and show up as cold spots. Such anomalies are easily imaged with currently available lightweight, handheld IR cameras, which can discern temperature differences down to 0.08 of a Fahrenheit degree. 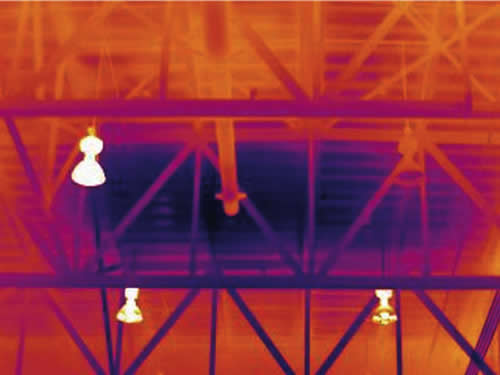 This IR thermogram of the underside of a standing-seam metal roof was taken in the morning.
The purple area was later verified by invasive testing to be wet. The yellow and orange areas were dry.

In extremely cold areas of the country, ice damming, the result of snow or ice that melts at the top of the roof and then refreezes when it flows down to the cold eave sections, can pose a serious safety hazard to pedestrians and vehicles below. To combat it, the ‘cold roof design’ system is designed to provide uniform and consistent constant-flow ventilation across the roof’s sheathed surface.

An IR camera can effectively evaluate deficient conditions in a cold roof system by measuring temperature differentials indicative of heat loss that can result in heated sheathing surfaces that allow snow melt and subsequent ice damming. IR can also be used to check for dead spots and insufficient coverage of ice melt systems used to prevent the freezing of gutters and downspouts. 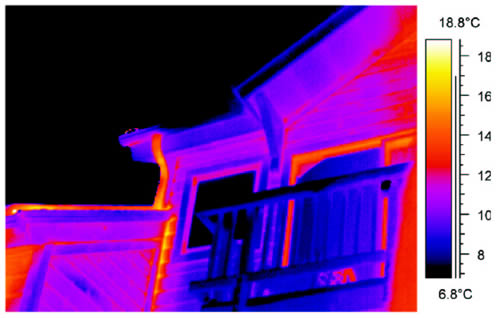 Here, IR identified a partially inoperative heat cable section
in a gutter ice melt system, the result of a damaged cable and connection.

Infrared can be used to investigate interior and exterior in-floor radiant heat systems used for heating inside and for eliminating the need for shoveling to reduce the risk of slips and falls outside. 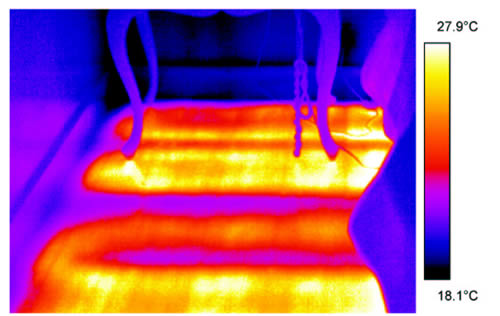 This infrared image shows the normal operation of an in-floor radiant heating system.

After fires, for example, IR can quickly locate remnant hot spots or assure the fire is completely extinguished and provide invaluable data for insurance companies’ Cause and Origin investigations. The clear IR images of diagnostic evidence normally invisible to the naked eye can assist in the planning and execution of the restoration effort and in the settlement process. 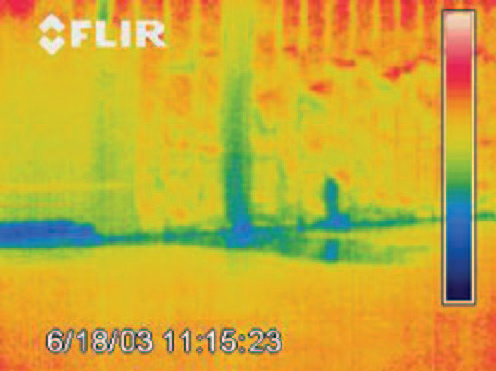 This thermogram shows water and moisture remaining from sprinklers that
were activated during a fire that was knocked down about 11 hours earlier. Note how the IR image
clearly identifies the wet areas in the insulation and building structure and on the floor by their relatively cooler temperatures.

After flooding, IR can quickly assess the extent of water damage and enhance the drying process by rendering the wet portion of materials visible.

Although considered cold-blooded creatures, termites are hosts to bacteria, which help break down and digest cellulose, the main ingredient of the wood they digest. The digestion process generates heat, and when large numbers of termites in nests congregate, a substantial amount of heat is concentrated in one area. As this heat moves through the walls or floor of a building, an IR camera can detect it on the surface and help to facilitate corrective action. 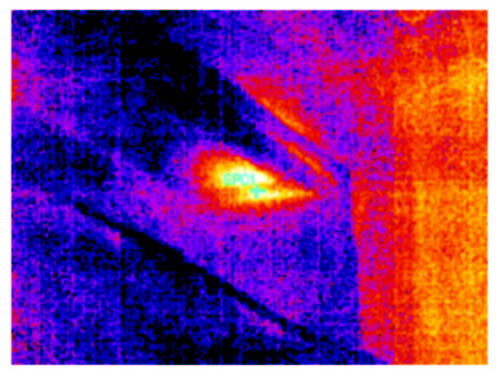 The yellow hot spot on this infrared thermal image of a door jamb indicates termite activity.

There are many instances where an infrared camera will find problems that the cleaning or restoration contractor wasn’t looking for. Such serendipitous findings can only enhance the contractor’s standing with his or her client and solidify their business relationship.

One such find occurred when Four Star Cleaning & Restoration of Fremont, CA was called in to document the water damage for insurance purposes at the site of a serious electrical fire at a garment dying facility. In addition to the wet walls, which had been soaked by the sprinkler system and fire department hoses, Four Star’s IR camera found an unexpected thermal anomaly – an excessive heat source within a closed 32-gallon drum containing sodium hydrosulfite used in the dying process. Some water had apparently penetrated the drum to produce poisonous hydrogen sulfide gas and enough heat to potentially cause an explosive condition from spontaneous combustion. A hazardous waste hauler was called in, and under the supervision of HAZMAT and local County Health Services, the drum was disposed of. 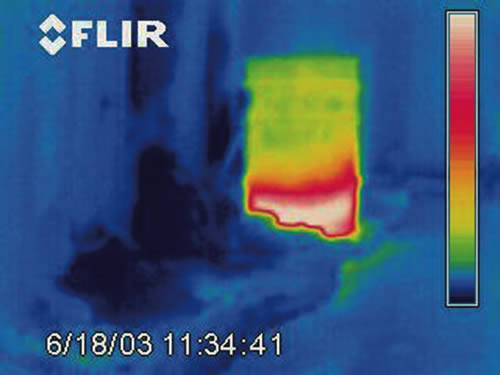 Here we see the IR thermogram that spotted a potentially catastrophic level of heat
being generated by an exothermic reaction of sodium hydrosulfite and water in 32-gallon drum.

“Not only were we able to document the water damage, but we were able to help prevent a second order catastrophe,” says Four Star V.P. Bill Weber. “If it hadn’t been for the camera, it’s quite possible there would have been serious damage to person or property. As a result, the tenant, the property manager, the fire department, city and county officials and the environmental professionals were all pleased with the outcome. And we were guaranteed a good reference and a future client.”

The Eye of the Beholder

Regardless of what an IR camera is used to inspect, its effectiveness is dependent not only on the contractor’s skill in operating the camera, but also on his or her knowledge and understanding of the function and operation of the component being inspected. Not every hot or cold spot represents a problem, but may in fact, be representative of the component’s normal operation, performance or of its location in the structure. Alternatively, a thermal image may actually show heat from sources other than the target that is reflected from or transmitted through the target material.

To meet the demand of the building diagnostics market, the Infrared Training Center (ITC), which is the world’s largest thermographer training organization, in conjunction with the Building Science Institute (BSI) has created a curriculum in Building Science. ITC’s three-and-a-half-day Building Science Certification class is the only training course in the U.S. that’s ISO-9001 registered. Upon successful completion of the class, students become Certified Building Science Thermographers, so if they work for an ISO-9000 company, they’ll have fulfilled their obligation for proper training. ITC also offers a two-day class for supervisors and a one-day class for technicians.

Based in part on an article that appeared in the
November 2000 edition of Cleaning & Restoration magazine.