Experimental Investigation
of High Frequency Plasma in the Infrared Spectrum 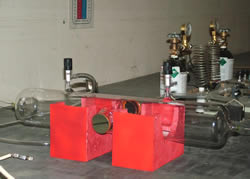 February 2005 (Norco, CA ) — Over 130 projects were presented by Norco Intermediate School students from grades 7 and 8 in a serious attempt to garner one of the coveted top eight positions that allow a student to advance to the District competition to be held March 5, 2005.

Those who attended Infraspection Institute’s IR/INFO 2005 held in Orlando, FL in January will not be surprised to learn that Shay Edwards won top place! During the course of that event, Shay presented a paper titled, Transmissivity: Observations of Gas in the Infrared Spectrum which was laudably received by those in attendance. His reflective and insightful responses to questions posed to him after his paper left little room for questioning his sincere interest in academic matters germane to infrared technology. 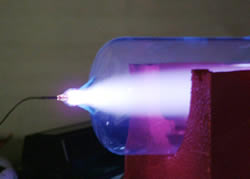 Shay Edwards does not luxuriate over his recent accomplishment but looks forward with anticipation to the next competition as he hones his experiment as evidenced by his observation: 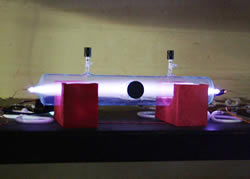 “I want to try to get lab time to test my project again. It seems like some oxidation from the tungsten electrodes might have resulted in outgassing, altering some of the test results. The first test with Argon gas the stream was very wide. Each test after that, the stream became narrower, finally spiraling at the end. The last gas tested was helium and it was red, when it should have been yellow. I thought it might have been the tungsten oxidation contaminating the chamber. I have since contacted a company to send me some different electrodes made out of Kovar that is graded to Pyrex so it can be sealed into the ends of the chamber.

“The first time I tested the chamber to see if it would hold a vacuum was rather tense. When it held all the way down to 0 Torr for over 5 minutes, I put in the Argon back up to 7 Torr. Once that held, I attached the power supply and it worked. It was very exciting to see it actually 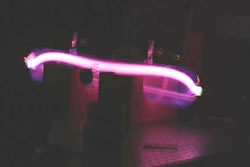 light up. Now it was on to the lab to do the real test. You could see through the Germanium window perfectly with the 760 8-12 micron camera. Plasma caused no obstruction in viewing. The Spectroradiometer, however, showed some minor viewing differences.

“I am still studying those. I need to rule out the outgassing before I make any final conclusion on my project.”

Shay concluded his remarks by stating his appreciation for the “advice and support from Infraspection Institute and the IR/INFO Conference attendees.”

Below is the abstract for Shay Edwards’ current project. 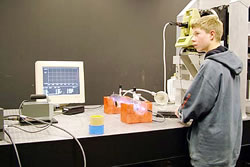 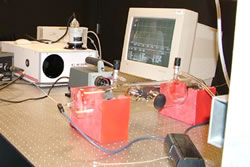 Materials and Methods: To test my hypothesis, I had a 4” x 24” plasma chamber constructed from Pyrex. On each end of the chamber is a tungsten electrode. Directly in the center on each side of the chamber is a 2” opening. One opening has a 16 gauge steel plate which is coated with flat black high heat paint. On the other opening is a 2” germanium window. The steel plate was heated by a hand warmer reaching 130 degrees attached directly to the outside. I used a Spectroradiometer, which operates in the spectral range from 2.5 to 14.5 um, and an 8-12 micron infrared camera with digital imagery. Testing was performed on Argon, Helium, and Neon plasmas. Before each test, the chamber was evacuated and held at 0 Torr for 6 minutes. Each gas was then inserted through the same vacuum hose to exactly 7 Torr. The power supply was a 5.5kV with 2.0 Amps current, and a frequency of 20 kHz. Clips were attached to the tungsten leads and power was turned on by a pull switch. The plasmas were tested in a controlled environment and photographed before and during the testing.

Results:Using the SR5000 Spectroradiometer wide range capabilities, I was able to look at one micron at a time with each plasma tested. After the SR5000 testing, I was the able to proceed using the information that I had gathered and test with the infrared imaging system on the same plasma to visually look for obscuration of the heat source. 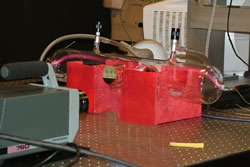 Conclusions/Discussions: The data from both types of test supports my hypothesis that Argon, Helium and Neon plasma had no affect on the transmissivity in the infrared spectrum.

Summary Statement: This project was an experimental investigation of high voltage, low current and high frequency observation of plasma in the infrared spectrum.

If you wish to send a word of encouragement, you may send Shay an e-mail.