Utilized with Mikron’s MikroSpec R/T software, the system produces a composite IR and visual image, as well as separate images of each. The resulting composite can be viewed in an infinitely blended percentage of visual/IR, simply by moving a slider bar in the software screen.

Up to 32 regions of interest (ROI’s) can be defined on the thermal image in any complex shape, enabling the system to trigger alarms at the approach of intruders or from temperature excursions on equipment. Visual surveillance enhanced with IR imaging makes it easy to spot intruders 24/7, without supplementary lighting.

Intranet/Internet-enabled system offers 32 user-defined IR regions of interest per camera to trigger screen alarms or outputs to SCADA systems
“The declining cost of IR imaging technology now makes it economical to provide both security and maintenance monitoring in a single package, on one line, to any computer,” said Jon Chynoweth, Vice President of Sales of Mikron Infrared. “From a security standpoint, an intruder cannot hide from the IR camera at night. And each IR camera effectively does 32 jobs by monitoring that many user-defined zones, whether it be a fence perimeter for security or a transformer for impending failure, triggering alarms at the master control when high/low setpoints are exceeded. Up to 14 cameras can be monitored at one time from a PC, and this system can easily be used as a component for an enterprise-wide SCADA system.”

The DualVision 724 system consists of separate thermal imaging and video cameras in an environmentally sealed, temperature-controlled enclosure. Both cameras have Internet IP addresses and password protection, allowing control from any computer using wired or wireless Ethernet.

MikroSpec Real-Time Thermal Data Acquisition and Analysis software blends the thermal and IR camera feeds into a single DualVision image with correct aspect ratio and spatial area. By applying an isotherm color pallet to the IR image, hot spots are easily identified while viewing the scene as a visual image. The composite image can be adjusted to show any percentage of the IR and visual. ROI’s in the image can be defined using 10 different shapes, including freehand. 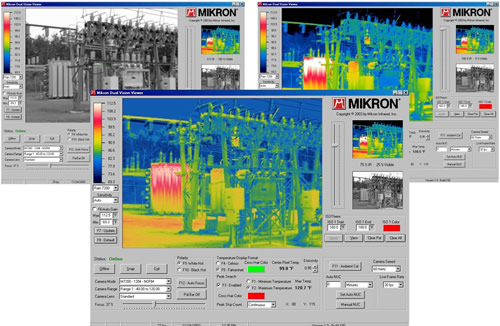 The MikroSpec R/T software can record up to 75 minutes of blended visual and IR video to a hard drive when capturing every frame from a camera set at a frame rate of 30 Hz. Total record time can be greatly extended by capturing images at intervals, rather than continuously. Video capture can be triggered by a temperature alarm from one of the ROI’s or by direct signal from the PC. A user-selectable prebuffer of video allows the operator to also capture what happened in a scene before an event trigger.

The IR and visual cameras are housed in a single enclosure that has a hinged back section containing all the interface connections, including RJ45 Ethernet, RS170 video, connection for a high-resolution LCD, and a power termination strip. The front section holds the cameras and has a slanted IR-transparent window to resist snow/dirt buildup. Cameras are supported on an internal shelf, with space underneath for power supplies, wiring, etc. A remote-controlled pan-and-tilt head is also available.

The visual camera can be color or b/w. Cameras can be fixed focus or have auto iris and remote focus. The MikroScan IR camera uses state-of-the-art uncooled UFPA microbolometer technology, providing measurement accuracy of ±2% or 2°C. It can be set manually or automatically for three different temperature ranges. Two image update rates (30Hz/60Hz) are selectable. Standard field of view is 28.9°(H) x 21.9°(V), with autofocus from 30 cm to infinity. Telephoto and wide angle lenses are available.

All DualVision systems are fully integrated by Mikron Infrared and provided on a turnkey basis to ensure customer satisfaction.