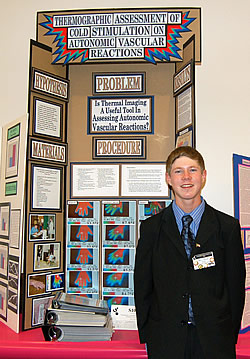 His entry titled, ‘Thermographic Assessment Of Cold Stimulation On Autonomic Vascular Reactions – Is Thermal Imaging A Useful Tool In Assessing Vascular Reactions?’ was chosen from more than 900 middle and senior high school students during the final round of statewide competition.

In order to compete at the State level, students must first qualify at the regional level before advancing to the State Fair. Edwards won the Sweepstakes Trophy in the Senior Division at the 4 county regional fair on April 19 qualifying him for the State competition for the 4th year in a row.

This year, there were 825 entries from a base of 82,000 students all competing for one of the 71 slots to advance onto the State Fair.

On May 23 the students presented their projects to a panel of 6 research scientists, college professors and professionals. Shay won second place and $250 in the Senior Division Mammalian Biology category with his project. 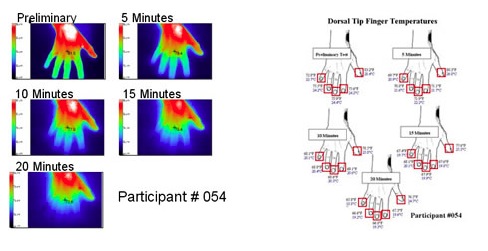 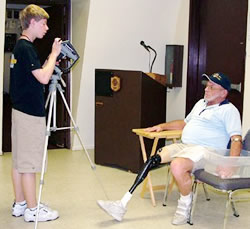 Shay describes his current and past science fair projects as follows: “I have done testing to see if materials and textures affected infrared viewing. Two years ago I researched if the chemical composition of gas affected viewing in the infrared spectrum. Last year I made a plasma chamber with a germanium window to observe high frequency plasma in the infrared spectrum. This year I got to borrow a Raytek Ti30 thermal imager so I did not have to go to a lab to do any testing. I thought that I would see if an infrared imager could assess vascular differences in smokers, diabetics, versus a control group of people.” 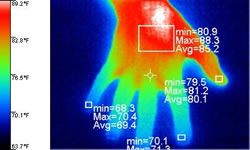 “Working with Shay has been a genuine pleasure. Shay is an intelligent and hard working student. He carefully chooses his projects, never shrinks from a challenge and is meticulous in his fieldwork. We are proud to call Shay and his parents friends.”

Shay continues, “I was invited to attend the Infraspection Institute’s annual IR/INFO Conference once again this past January. Many of the IR/INFO Conference attendees participated as subjects in my research. I am very appreciative for everyone’s help. I am especially thankful to Infraspection Institute and Mr. Seffrin for all of his help throughout all of my projects.”

Shay is grateful for the encouragement that fellow thermographers have provided. He adds, “I would like to thank everyone for your emails. If you participated in this research and would like your images and assessment sheet you could email me and I will send it to you.”

If you wish to send a word of encouragement,
or to request your images and assessment sheet,
you may send Shay an e-mail.

Objective: The objective of this study is to determine the potential usefulness of thermal imaging technology to evaluate and monitor autonomic vascular reactions, and to establish whether thermal imagery can be used to effectively detect pre-clinical stages of circulatory problems.

Materials and Methods: To test my hypothesis as to the effectiveness of thermography as a useful tool for assessing autonomic vascular reactions a cold stimulation test was preformed on 60 participants using a radiometric thermal imager.

Results: Three groups of people were clearly defined by the thermal imager. The diabetic group had no visible thermographic finger tip change while the overall average temperature did decline slightly by an average of 2°F. The smoker group had an extremely mottled and uneven thermographic appearance of all fingers and hand with a slight decline initially in temperature while rising 2°F and holding constant until the end of the 20 minute test period. The normal/control group’s thermographic assessment of the circulatory system showed that the right hand was significantly affected, with a steady decline in surface temperature as much as 10°F (average of 8°F± 2°) and beginning with very visible thermographic finger tips to almost non visible appearance at the end of the 20 minute test period.

Conclusions/Discussions: Using three defined groups amazingly showed clear differences in circulation. The data from the test supports my hypothesis that thermal imaging can be a useful tool for examining circulation.

If you wish to send a word of encouragement, or to request your images and assessment sheet, you may send Shay an e-mail.