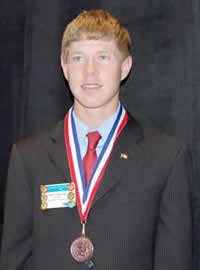 His entry titled, Prospective Study of the Effectiveness of Thermal Imaging in the Diagnosis of Arthritis was chosen from nearly 1000 middle and senior high school students during the final round of the state wide competition.

On March 15th, Edwards won third place at the Junior Science and Humanities Symposia regional competition held at the University of California at Irvine. The JSHS is a regional and national symposium held during the academic year and reaches over 10,000 high school students and teachers throughout the United States, Puerto Rico, and the Department of Defense Schools of Europe and the Pacific Rim. Each of 48 university-held regional symposia invites the participation of secondary schools within their region.

Since 2002, Infraspection Institute of Burlington, NJ has been providing support and guidance to Shay for his annual science fair competition. Jim Seffrin, Director of Infraspection, was especially proud of Shay’s recent accomplishments. “Shay is a pleasure to work with. He is both a critical thinker and dedicated researcher. He represents the finest qualities in a young adult and we are very proud of him.”

Shay adds, “I would like to thank the staff of Infraspection Institute and attendees of the IR/INFO 2008 conference for support and for volunteering as subjects for my research. A special thanks goes to Mr. Seffrin for his continued mentorship and guidance in my research and use of thermal imaging.”