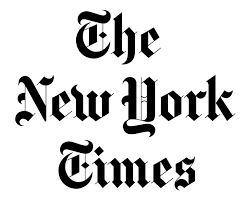 Date of publication: 2/15/2020 and available online at:
www.nytimes.com/2020/02/14/business/coronavirus-temperature-sensor-guns.html

Chinese authorities are using infrared thermometers to screen people for the illness, as the devices have become synonymous with trying to contain deadly outbreaks. 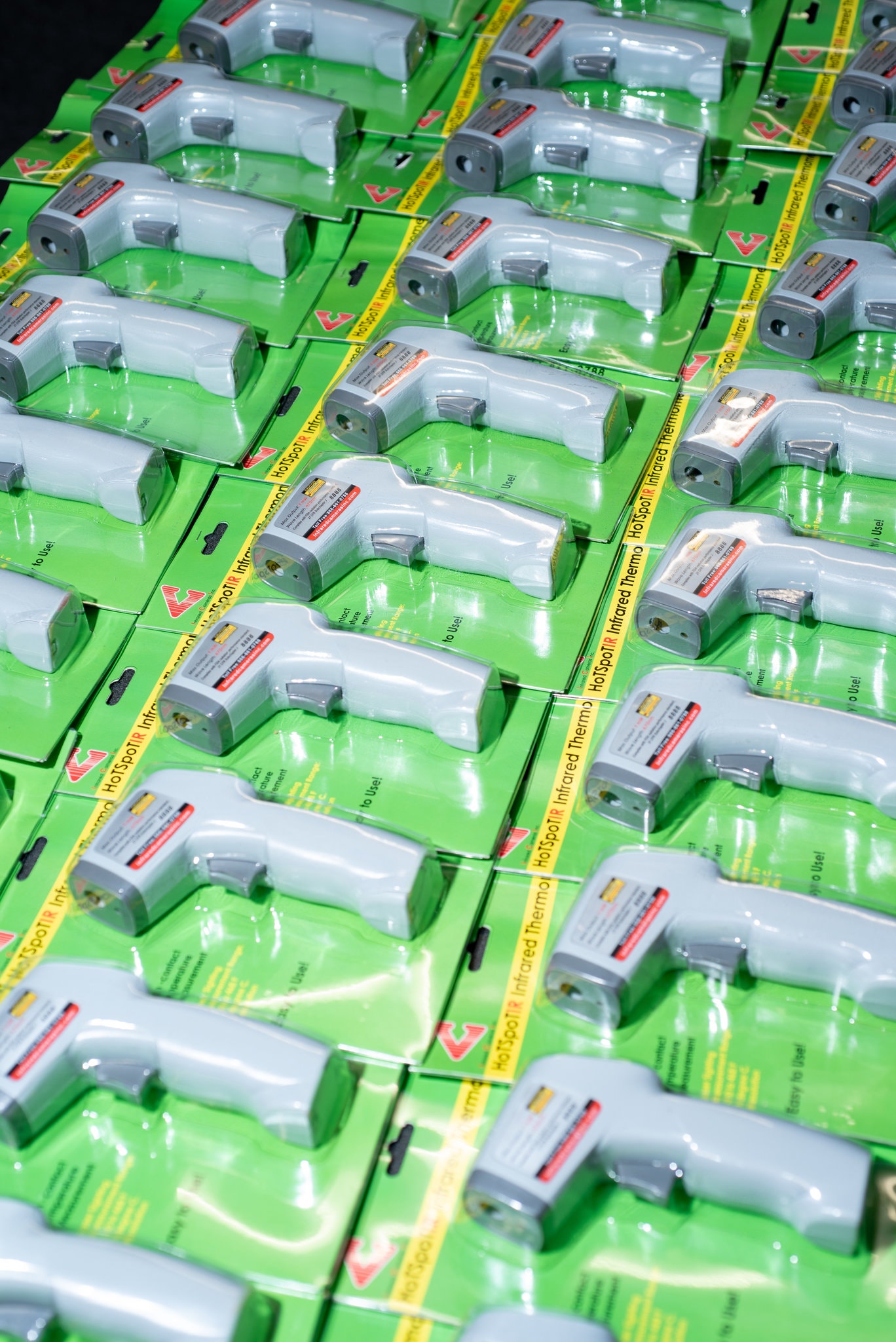 It has become an iconic image of the coronavirus outbreak in China:  a masked official aiming what appears to be a small white pistol at a traveler’s forehead.

For weeks, this ominous-looking device has been deployed at checkpoints across China – tollbooths, apartment complexes, hotels, grocery stores, train stations – as government officials and private citizens screen people for fevers in an effort to prevent the spread of the deadly coronavirus.

Sometimes described as a “thermometer gun,” the device is equipped with an infrared sensor that can quickly measure surface temperature without making any contact with a person’s skin. In recent years, it has become an important tool for countries scrambling to contain viral outbreaks. It was widely used to try to slow the spread of SARS in China in the early 2000s and to curb the Ebola outbreak in West Africa a decade later.

But for all of its powerful sensing technology, the thermometer has ultimately proved to be an ineffective defense mechanism, according to medical officials and experts on infrared devices. Like the surgical masks that have become ubiquitous in China, thermometer guns tend to be unreliable outside carefully controlled health care settings. 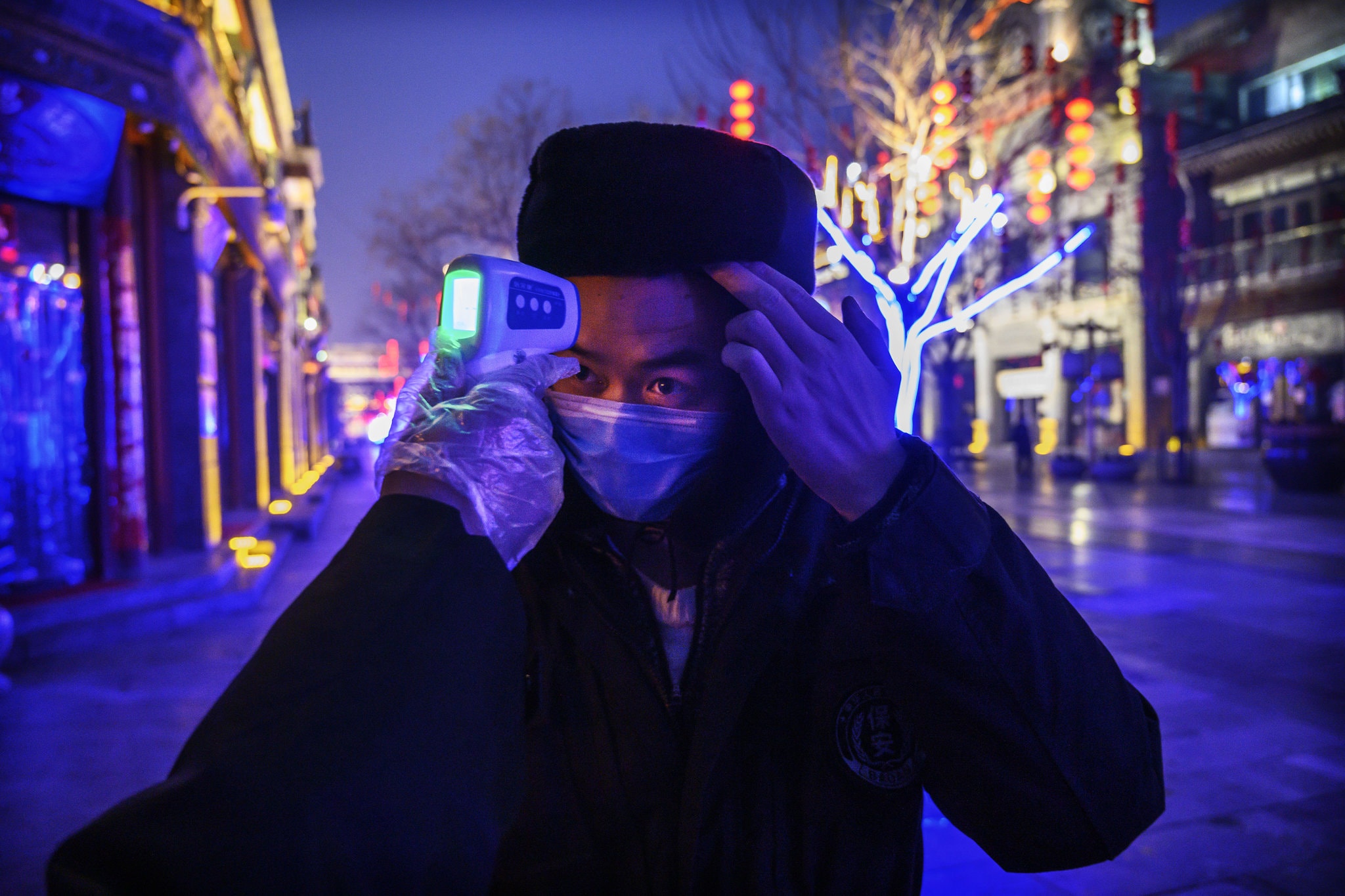 The thermometers determine temperature by measuring the heat emanating from the surface of a person’s body. Often, however, those wielding the tools don’t hold them close enough to the subject’s forehead, generating unusually low temperature readings, or hold them too close and get a high reading. The measurements can be imprecise in certain environments, like a dusty roadside, or when someone has taken medication to suppress a fever.

“These devices are notoriously not accurate and reliable,” said Dr. James Lawler, a medical expert at the University of Nebraska’s Global Center for Health Security. “Some of it is quite frankly for show.

When he traveled in West Africa during the Ebola outbreak, Dr. Lawler was frequently tested with infrared thermometers outside hospitals or at roadside checkpoints. The results suggested he was dying of hypothermia.

“My temperature was often 35 degrees Celsius or lower, which starts to become incompatible with life,” Dr. Lawler said. “So I’m not sure those were accurate.”

In theory, the thermometers, as well as more complex cameras that can also measure the heat coming off a person, allow local officials to quickly determine who may have a fever and then pull those people aside for further testing. So far, tens of thousands of people have contracted the coronavirus, and this week the death toll passed the 1,000 mark. Last month, the World Health Organization said temperature screenings could reduce “the risk of importation.” 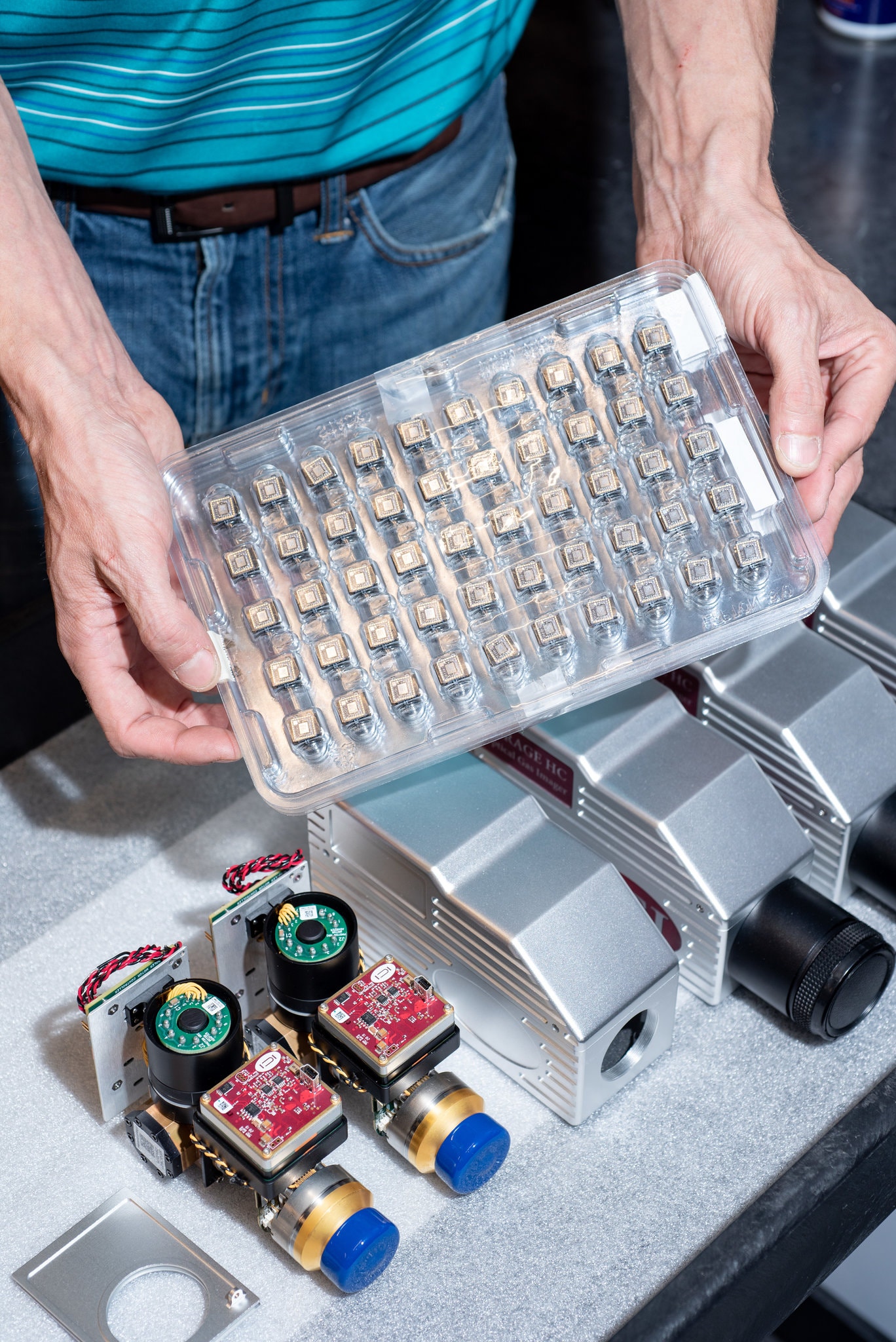 Demand has soared for devices made by Infrared Cameras in Texas.
Credit:  Carter Johnston for The New York Times

But on social media in China, people passing through the checkpoints have complained that the thermometers are producing unrealistically low readings in some situations and artificially high readings in others, like when a traveler is tested from inside a hot car.

It is a novel virus named for the crown-like spikes that protrude from its surface. The coronavirus can infect both animals and people, and can cause a range of respiratory illnesses from the common cold to more dangerous conditions like Severe Acute Respiratory Syndrome, or SARS.

According to preliminary research, it seems moderately infectious, similar to SARS, and is probably transmitted through sneezes, coughs and contaminated surfaces. Scientists have estimated that each infected person could spread it to somewhere between 1.5 and 3.5 people without effective containment measures.

The virus, which originated in Wuhan, China, has sickened more than 80,000 people in at least 33 countries, including Italy, Iran and South Korea.

New outbreaks in Asia, Europe and the Middle East are renewing fears of a global pandemic. The Centers for Disease Control and Prevention warned this week that Americans should brace for the likelihood that the virus will spread to the United States.

The World Health Organization officials have been working with officials in China, where growth has slowed. But this week, as confirmed cases spiked on two continents, experts warned that the world is not ready for a major outbreak.

The C.D.C. has warned older and at-risk travelers to avoid Japan, Italy and Iran. The agency also has advised against all non-essential travel to South Korea and China.

Washing your hands frequently is the most important thing you can do, along with staying at home when you’re sick.

Just because an infrared tool says someone has a high temperature does not mean the person is sick, let alone carrying the virus.

“They could have been exercising, they could be taking certain drugs,” said Jim Seffrin, an expert on infrared devices at the Infraspection Institute in New Jersey. “A person who’s been trying to catch a flight in an airport for which they are late — they may have run down a concourse.”

The growing demand for thermometer guns and infrared cameras that can detect fevers has caused shortages across the world, from the center of the outbreak in Wuhan to a small supplier in Texas.

A host of Chinese companies make thermometer guns, which have become more expensive as demand has increased from both government and private customers like schools and factories.

Alicn Medical (Shenzhen), a manufacturer in the Chinese city of Shenzhen, makes 2.5 million thermometer guns a year and is one of only a handful of companies in China that can achieve that level of production, said Mo Yingchun, its general manager. Still, raw material costs have surged and many workers can’t get around China’s outbreak containment efforts to show up for their jobs, meaning the company isn’t producing at full capacity.

“Even the governments are fighting for the products among themselves,” Mr. Mo said, noting that prices had climbed to three to five times the usual level. “Local governments want to guarantee their own needs first.”

Typically, he added, the company’s thermometers are used indoors to check on babies. “The thermometer guns are used only for quick screening and are not as accurate as traditional thermometers,” Mr. Mo said. “It was a small industry, and if it weren’t for the outbreak, it will not be put in the spotlight.”

Thousands of miles from the heart of the outbreak, a small technology supplier in Beaumont, Texas, has also been feeling the crush of demand. The company, Infrared Cameras, makes high-tech imaging equipment as well as infrared thermometers, which cost $25 apiece.

In a normal month, the company sells about 100 infrared cameras, according to its chief executive, Gary Strahan. Since January, the company has sold more than 1,000, supplying schools, cruise ships, factories, offices, hospitals and theaters in countries like China and South Korea. 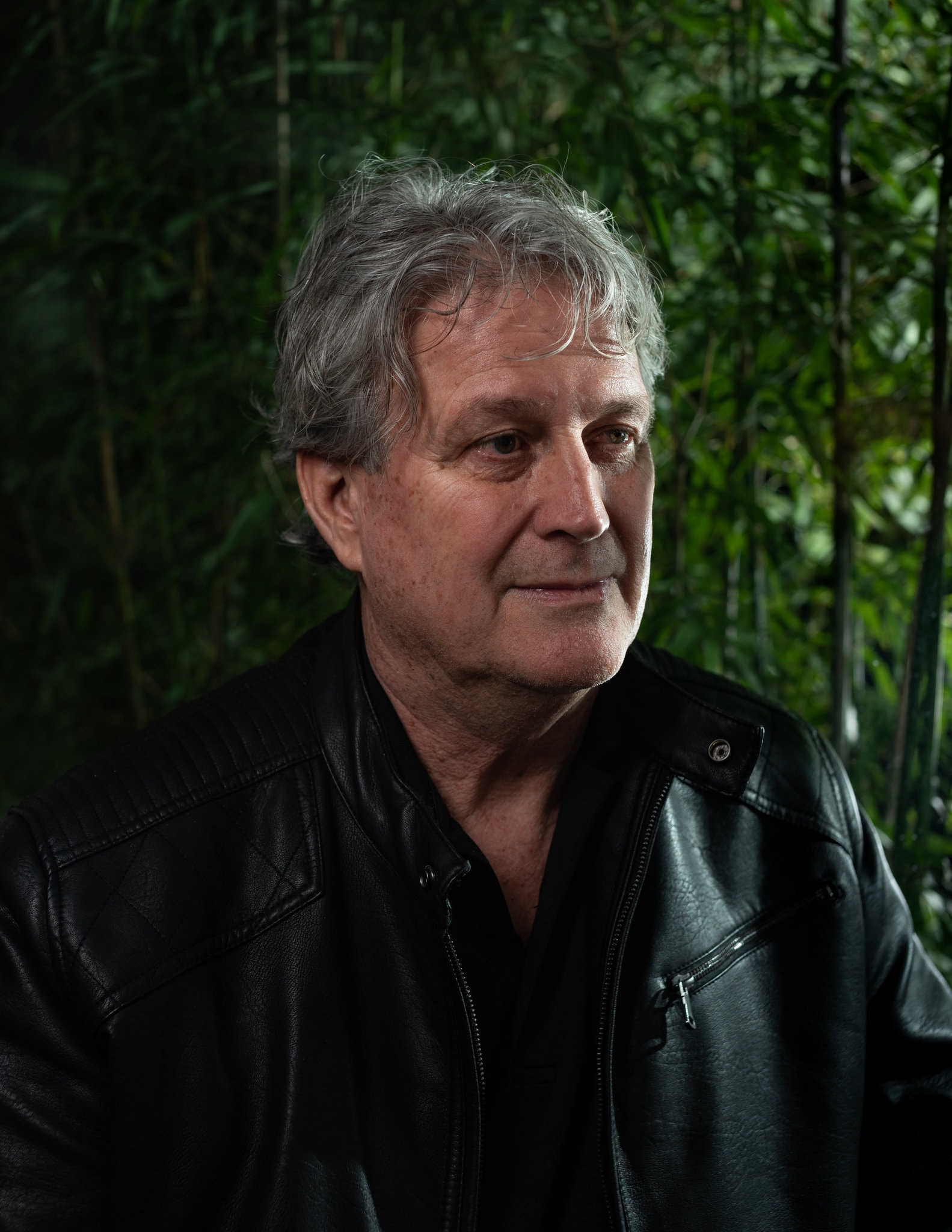 Gary Strahan, chief of Infrared Cameras, said his devices had a slim error margin, but others on the market are less reliable.
Credit:  Carter Johnston for The New York Times

Mr. Strahan said he had been working every day from 4 a.m. to 10 p.m. to keep up with the orders.

The company’s cameras and thermometer guns have a margin of error of 0.1 to 0.2 degrees Celsius, according to Mr. Strahan, who has been selling infrared cameras since the 1990s. But many products on the market are less reliable.

During past outbreaks, some checkpoints have used cameras or thermometer guns that were designed for industrial purposes, like measuring the temperature of a vehicle, rather than finely calibrated medical tools.

“If you’re going to use the technology, you have to come at it with the proper equipment,” said Mr. Seffrin of the Infraspection Institute. “What we saw during the SARS outbreak is people were quick to pick up industrial instruments.” 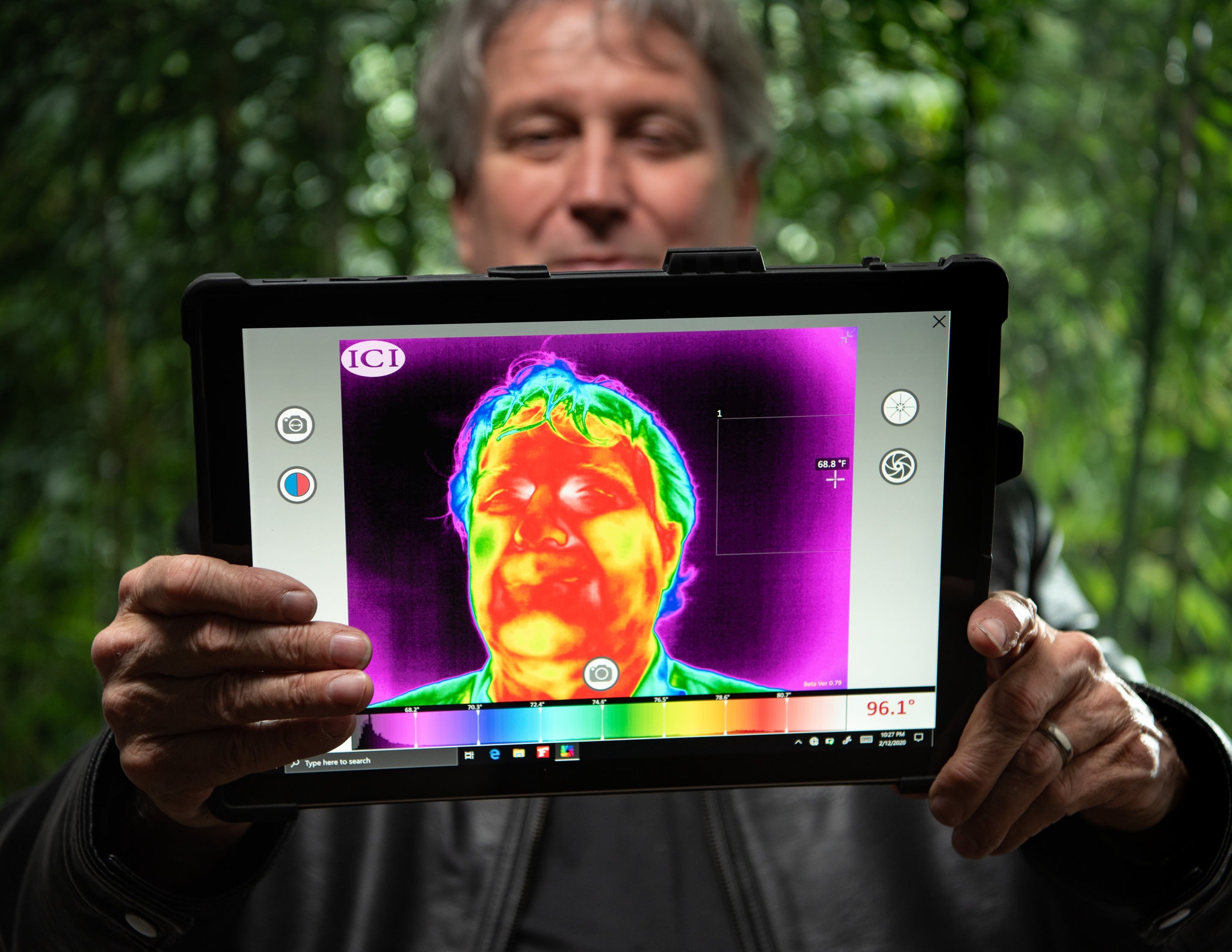 Even a perfectly precise temperature sensor would not necessarily catch everyone carrying the coronavirus. Infected people can take several days to develop a fever, according to The New England Journal of Medicine. And travelers who already have a fever might take Tylenol to suppress their symptoms, sometimes in a deliberate effort to deceive the authorities. In Qinghai Province in China, the police are investigating one man on suspicion that he passed through checkpoints by covering up his ailments.

Still, Mr. Strahan said he hoped his company would help slow the spread of the virus, even if temperature screenings are unlikely to stop the outbreak altogether.

“Because of the inaccuracy of a lot of the systems being sold out there, people are missed and then the infection spreads,” he said. “It’s a very real situation, and I feel like I’m right in the middle of it.”

That was certainly the case on Thursday morning: At the company’s office in Beaumont, Mr. Strahan’s team was packing 300 thermometer guns into boxes, all of them bound for China.

More on the Outbreak

How the Coronavirus Numbers Changed So Sharply  Feb. 13, 2020

The Coronavirus: What Scientists Have Learned So Far
Jan. 21, 2020

David Yaffe-Bellany reports on the food industry and general business news. He graduated from Yale University and previously reported in Texas, Ohio and Connecticut. @yaffebellany