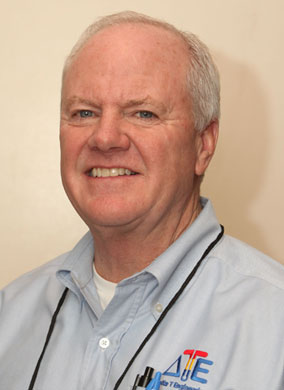 While infrared inspections can be valuable in helping to prevent unexpected failures, they provide a single “snapshot”, leaving the subject components unmonitored for the balance of the year. Recent advances in technology have resulted in wireless sensors that monitor for the same types of defects that are detectable by thermal imaging. When permanently installed on electrical enclosures, these sensors can provide year- round monitoring of electrical system components and can immediately alert personnel when problems arise.

This paper will discuss the theory and application of the Delta T Alert monitoring system and how it can be used to complement and enhance the effectiveness of an existing infrared inspection program within commercial office buildings. Installation and set-up procedures of the system will be discussed along with actual case studies.

In the highly-competitive world of commercial building management, your success depends on high tenant occupancy, controllable expenses, and trouble-free operation. That means no unexpected shutdowns, no major equipment or service failures, and no expensive emergency repairs.

The heartbeat of any commercial building is its electrical distribution system, which regulates water pressure, climate, communications, and lighting. Without this heartbeat, all services stop – along with your business. Facility downtime is not an option if you want to keep your tenants. 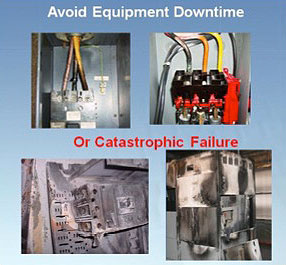 According to Hartford Steam Boiler Inspection and Insurance Company (HSB), (www.hsb.com), electrical system malfunctions are the leading cause of commercial building fires. These fires have increased in frequency and severity over the past two decades, due primarily to increased demand on existing electrical systems. Even newer buildings are not immune to electrical failures, as businesses demand an ever-increasing stream of power, placing more and more pressure on overloaded systems.

According to Hartford Steam Boiler, the number one cause of such failures is a lack of proper maintenance – or no maintenance at all. HSB reports that 75% of all electrical failures are due to human error or carelessness, deficient or delayed maintenance, unqualified personnel, and/or budget cuts. According to the Institute of Electrical and Electronics Engineers (IEEE) in New Jersey (www.IEEE.org), the failure rate of electrical systems is three times higher for those that have not had preventive maintenance than for those that have.

In a typical one-million square foot high-rise commercial office building, there are literally hundreds of electrical power and distribution panels, along with just as many disconnects. This equipment may receive an infrared scan once per year, at most, or an occasional “clean and tighten”, which is conducted during off hours. The “clean and tighten” procedure requires both an electrical shutdown and significantly higher electricians’ wages (time and a half or double time). It is a major expense and inconvenience for both building owners and their tenants.

Meanwhile, some experts do not recommend routine tightening of electrical connections. In many cases, over-tightening can deform the bolts and/or the contact faces, decreasing the surface contact area and producing greater resistance. Greater resistance can cause heat buildup, potentially damaging insulation and components.

Commercial facilities’ infrastructures typically have many safeguards in place such as: pump gauges, water tank level alarms, and smoke detection. In many cases, a property may have a Building Management System (BMS), which controls and monitors the building’s mechanical equipment, such as air handling and cooling plant systems, as well as lighting, fire extinguishing, and security systems.

Electrical distribution systems, however, are often overlooked because most of the facility’s electrical enclosures are inaccessible. Since many electrical enclosures cannot and should not be opened in the “on” or “energized” position, maintenance personnel usually enter an electrical switchgear room or electrical closet limited to their senses – sound, sight and smell – to detect signs of overheating. But, once a worker smells something burning or hears something arcing, significant damage has already occurred, and the level of danger has increased significantly. 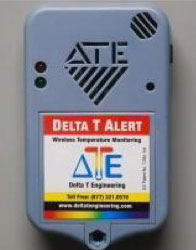 You can avoid a major electrical breakdown – and significant financial loss – with the “Delta T Alert”. Developed by Delta T Engineering, LLC, this patented device magnetically attaches to your electrical equipment covers, monitoring the Delta T (temperature differential) between the interior of an electrical enclosure and the ambient temperature of the room that enclosure is in.
You can adjust the Delta T to collect data on a daily basis, at specific time intervals. The information is then transmitted wirelessly to an onsite computer for analysis. Whether your panels are located in a 20° warehouse in Alaska, a 100° switchgear room in NYC or a 65° data center in Tuscaloosa, the Delta T Alert can warn you of excessive temperature rise within your electrical enclosures before more serious problems arise.

A Simple Device with Staggering ResultsHow it Works

Delta T Alert is a self-contained temperature-monitoring sensor that attaches magnetically to electrical enclosure covers. This sensor is designed to work on NEMA 1 enclosures which are constructed for indoor use to provide a degree of protection to personnel against incidental contact with the enclosed equipment and to provide a degree of protection against falling dirt. 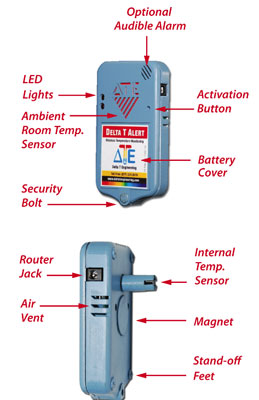 Delta T is then configured to collect data on a daily basis, at specific time intervals. The information may then be transmitted wirelessly to an onsite computer for analysis and trending. Delta T Alert will warn you of temperature rises within your electrical enclosures – well before more serious problems arise.

Our proprietary software will allow you to print reports and trending graphs, as well as scheduled repair logs for maintenance. Reports include the following:

Delta T Engineering’s software is capable of being bridged-over with most Building Management Systems (BMS) on the market today.

Poor connections and overloaded circuits are directly responsible
for more than 30% of electrical failures.

Delta T Alert is not designed to detect:

There has never been an easier, more cost effective way to keep your electrical enclosures operating safely. The Delta T Alert system will enable customers to Monitor – Report – Diagnose & Repair problems prior to downtime or even catastrophic failure. Your building’s maintenance personnel and/or electricians will have an enormous safety advantage if they are warned, prior to any type of routine maintenance or troubleshooting, of possible electrical anomalies prior to accessing electrical enclosures.

By utilizing Delta T Alert as a proactive maintenance tool, it is possible to extend the service life of electrical infrastructure as well as reducing the overall maintenance cost and associated downtime.