Revenue from the sale of the Company’s Thermography products for the first quarter increased 42% over the first quarter last year, primarily due to continued strong demand from traditional markets and growth in new markets such as building inspection and moisture detection. Excluding the impact of the Indigo acquisition, Thermography revenue rose 28%.

Revenue from the sale of the Company’s Imaging products increased 66%, reflecting particularly strong deliveries in the airborne and maritime product lines. Excluding the impact of the Indigo acquisition, Imaging revenue rose 42%.

Cash generated from operations totaled $19 million for the first quarter of 2004. At March 31, 2004, the Company had cash and cash equivalents of approximately $56 million.

“Our financial performance in the first quarter was the result of strong growth in virtually all of our product lines and all of our markets. We are pleased with Indigo’s performance in the quarter, and with the progress of integrating the two companies. I believe the Company is well positioned to achieve our goals for 2004,” said President and CEO Earl R. Lewis. “Based on the quarter’s results, and the expectations for the remainder of the year, we are refining our guidance for earnings per share to between $1.55 and $1.60, from a prior range of $1.50 to $1.60.”

“Our Imaging division has performed extremely well over the past three years, and Andy and Bill have been critical to that success. They have proven themselves in their previous roles as highly effective managers and experienced infrared industry executives,” commented Earl Lewis. “I am confident they will be successful in leading our Imaging business into the future,” he concluded.

The statements in this release by Earl R. Lewis regarding the progress in integrating Indigo Systems Corporation, the expectation of achieving the Company’s goals for 2004 and refining the guidance for earnings per share to between $1.55 and $1.60 per share are forward-looking statements. Such statements are based on current expectations, estimates and projections about the Company’s business based, in part, on assumptions made by management. These statements are not guarantees of future performance and involve risks and uncertainties that are difficult to predict. Therefore, actual outcomes and results may differ materially from what is expressed or forecasted in such forward-looking statements due to numerous factors, including the following: changes in demand for the Company’s products, product mix, the timing of customer orders and deliveries, the impact of competitive products and pricing, the Company’s continuing compliance with US export control laws and regulations, constraints on supplies of critical components, excess or shortage of production capacity, actual purchases under agreements, the continuing eligibility of the Company to act as a federal contractor, the amount and availability of appropriated government procurement funds and other risks discussed from time to time in the Company’s Securities and Exchange Commission filings and reports. Further, such statements are subject to the risks inherent in acquisitions of technologies and businesses, including the timing and successful completion of technology and product development through volume production, integration issues, unanticipated costs and expenditures, changing relationships with customers, suppliers and strategic partners, potential contractual, intellectual property or employment issues, accounting treatment and charges, and the risks that the acquisition cannot be completed successfully or that anticipated benefits are not realized. In addition, such statements could be affected by general industry and market conditions and growth rates, and general domestic and international economic conditions. Such forward-looking statements speak only as of the date on which they are made and the company does not undertake any obligation to update any forward-looking statement to reflect events or circumstances after the date of this release.

FLIR has scheduled a conference call at 11:00 a.m. EDT today. A simultaneous Web Cast of the conference call may be accessed online at www.fulldisclosure.com or www.FLIR.com. A replay will be available approximately one hour after the Web Cast at these same Internet addresses. For a telephone replay, dial 800-633-8284, reservation #21193066 beginning at approximately 1:00 p.m. EDT.

CONSOLIDATED STATEMENTS OF OPERATIONS
(In thousands except per share amounts)(Unaudited) 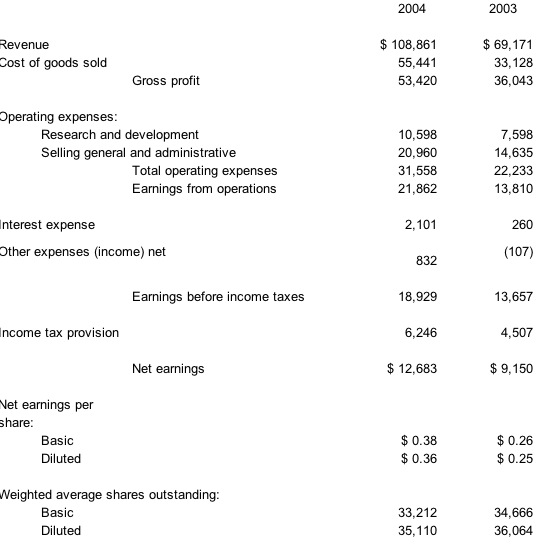 2003 share amounts have been adjusted to reflect the two-for-one stock split. 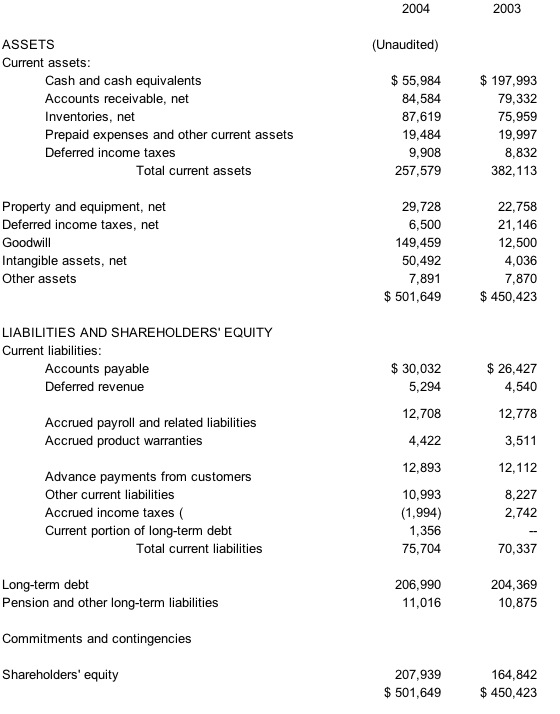